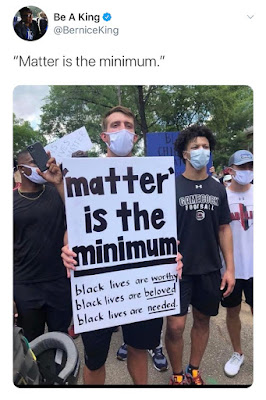 There is no level of melanin in another human being's skin that makes that human being less.

Y'all, she's only two months old.
How.  The hell.  Is she that freaking tall at 2 months old?  Her daddy isn't a giant, and none of her grandparents were either!

Someone please tell my baby horse that her first year on Earth is not a race to see how quickly she can be taller than her mother.  I'm gonna need a damned ladder to get on, if she keeps this up!

I finally picked a name! 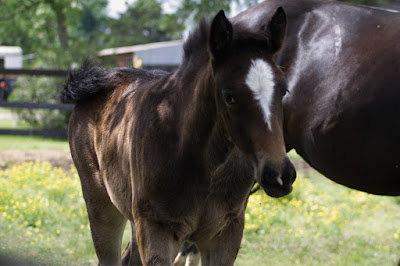 Her official registered name will be Freya's Needle.

Which... I know it sounds like it has nothing to do with Dragon, but there was a long and winding mental road to get there. lol The initial suggestion from the BOs was "Dungeons and Dragonflies," and while that didn't quite work for me, I kind of ran with the dragonfly part.  (I have all kinds of suggestions related to dragonflies, if anyone needs any!)

But nothing was really sticking.  In desperation, I started googling things like "nicknames for dragonflies" and "gods associated with dragonflies."  Which is how I found two things:
Her sire is Auraxium War.  Her dam is Oubliette d'Acier - depending on translation, "steel dungeon" or "forgetfulness of steel" or "strength through forgetfulness."

And needles are steel, at least modern ones.

I was sitting there after reading that stuff and just kind of hit on "Freya's Needle" as an idea, and it just... didn't go away.  So we're keeping it, and we're keeping Dragon as a barn name. 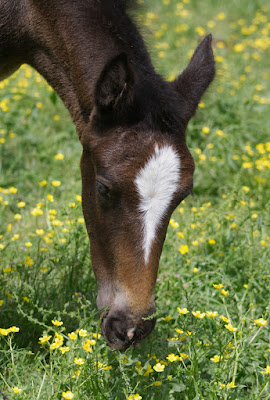 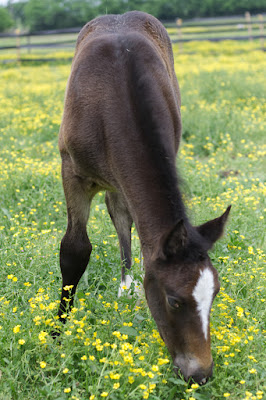 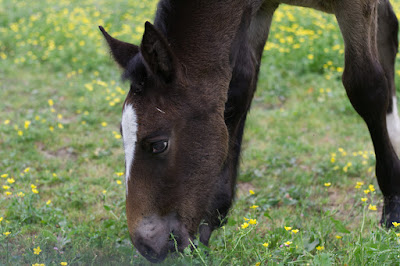 She is, as you can see, very impressed.

In other news, Cessa has already managed to lose one of her grazing muzzles so thoroughly that three of us searching the two pastures where it could be can't find it (which was today, and I hurt, and that's all I'm saying about that).  We're basically gonna have to let the mower find it if it's in the north pasture, because if it's there, it's buried deep in the grass or in some hollow we can't see because of the grass.  It could also be in the pond in the main pasture.  Who knows...

But it's okay.  Vet's going to have us try some thyroid medication, and Cessa has to stay in the arena, getting a little hay and just enough ration balancer to take her meds until she does start losing weight.  (She's got a little bit of grass to chew on as well, since the arena has grass, but it's short and the vet said it's OK.)

...I may still have some Tile stickers coming from Amazon so that I can GPS tag the damned muzzles, though. lol

And in local health news, our dumbass governor has opened up the state "partially" and half the damned population is out acting like it's Spring Break.  Second Quarantine is gonna be even worse than First Quarantine was, but I'm pretty sure it's gonna be a Thing.  Ugh.
Posted by Sarah W at 9:20 PM No comments:

Mid(ish)-month, and what a month it's been

Seriously, y'all. It's been a month.  Shelter in place orders aside... after the AC issue (did you know that if you have central air with an air intake under the unit, if the hole's too big, the unit can eventually fall in?), we had a defective GFI outlet in the house die spectacularly (you know it's "good" when the tech asks to take the outlet with him to show newbie electricians), the microwave died Monday night...

In barn news, Justice's momma had to be put down due to complications with foaling (her foal survives and he's thriving so far).
And at least three members of the (very) extended barn community have either lost a parent (one of them to COVID) or have a deathly ill parent in the hospital.

It is, on top of everything else, exhausting.  I feel exceptionally stupid right now, just because the brain is opting out of things more complicated than "watch a YouTube video" or "play a silly video game."

On the other hand, I persuaded my husband to go with me to the barn so he could meet the new baby, so I have more pics!


Also, funny thing... I never thought actually picking a name would be the hard part!  I have a whole list of ideas - favorites right now include "Dungeons and Dragonflies," "Snapdragon," "Freya's Needle," and "Clockwork Dragonfly" - and I can't pick one!
Posted by Sarah W at 8:16 PM No comments:

After some deliberation - and realizing that our "stay at home, but let's not call it that" order (*sigh* Really, guys? Really?) got extended to the end of the month - I ran up to the barn this morning while my BOs were still asleep and dropped off the grazing muzzle, because laminitis risks are bad.  While I was there, I picked up Cessa's blanket.

And maybe stole a few over-fence cuddles with the mareface herself...


...And maybe creeped on Dragon a bit from outside the fence. 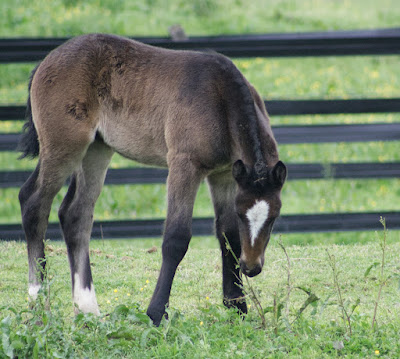 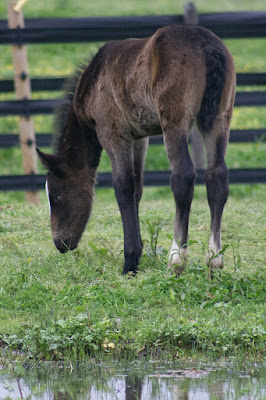 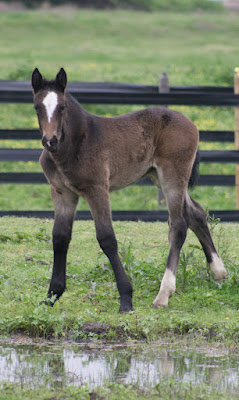 You know.  Since I was there and all, and a) not interacting with humans and b) not getting into a situation where humans would need to interact with me.  And then I came right the hell back home, away from potential virus vectors (like everyone else).

Dragon is growing so fast!  She's only two and a half weeks old, and I swear she looks older.  Word back on the genetic testing is that she's got LP, too, so she'll be a color-changer like Justice was... just darker.
Posted by Sarah W at 10:27 PM 2 comments:

I've mentioned before that my BOs are awesome, right?  Because they're awesome and send me pictures of my new baby horse.  And videos.  :)

Tiny dispatches from the barn

Yesterday was first turnout day for the two new babies at the barn.  Very sad I missed it, but BOs took some cell phone video for me.

Look at the legs on her!