Crappy photos for a crappy week

I almost didn't go to the barn this weekend.  We lost our little dog on Tuesday, and I just... was out of emotional steam, I guess.

But the barn owner has a little dog she rescued, and I had probably eight or nine pounds of small dog food that was only going to go to waste here.  So I went and cuddled Justice for a few minutes. 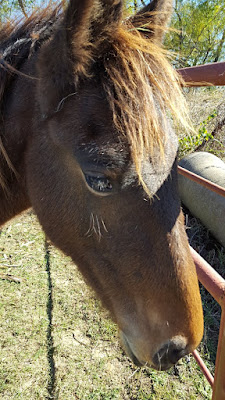 And then headed over to the main barn to hand off the food and visit Cessa.

It's weird how I was able to get rid of all kinds of other stuff that was the dog's and it was fine, but there was something about giving away her food that almost had me in tears all the way up there.  I walked out to visit Cessa and just kind of lost it again as I tried to call her name.

And for all that she was an absolute shit last weekend, this time she walked right up to me from probably thirty feet away and stayed next to me until I'd finished crying on her neck.  She's a pretty stoic animal, so I sometimes have to take other peoples' word that she really does like me; I definitely appreciate that she decided today was a day to make herself pretty damned clear. 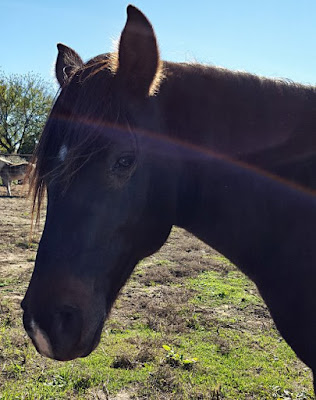 No barn time next weekend because of Thanksgiving.  I could technically do it, but considering my holiday is going to involve a five-hour drive, I'm not coming home and then immediately making an hour drive unless there's an emergency!
Posted by Sarah W at 8:15 AM No comments: 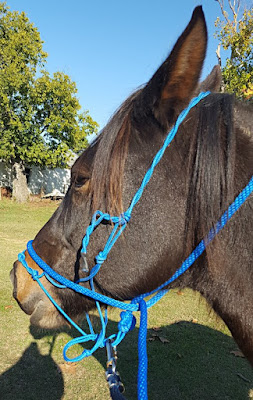 Yup.  She pulled back again and pretty much destroyed another halter.  (It might fit a full draft head now...)

Not only did she destroy the damn halter, she also led me on a merry ten minute chase around the property, because food and screw you, human.  Trust me, the look on her face isn't half as pissed-off as the look that was on mine.  Effing mare.

So I guess the next step is multiple halters and convincing her she's dying if she does it again.  This is so frustrating; I'd love to go do some stuff with her in the spring, but if she's still pulling back, I'm not taking her anywhere.  I'm not paying for a bunch of trailer repairs because she's popped rings off of shit, and I don't want to send her to a trainer (even if I could afford it right now) when she's a damned embarrassment that won't tie.

At least I got some cute pictures before she decided to be a shit. 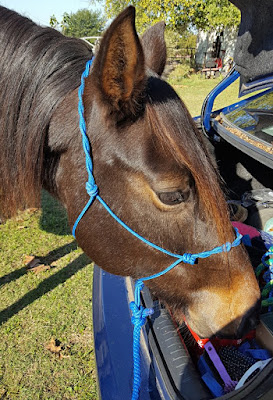 "Hey, aren't there treats in here?" 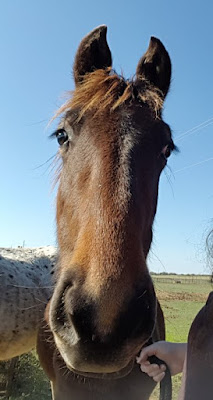 And an excerpt from the cutest selfie ever.
Posted by Sarah W at 8:03 AM No comments:

Not much motivation for anyone at the barn today, so I didn't even bother to halter the beasties.  Just gave them some petting.

And amused myself terribly.  Ever wonder what it looks like when your horse is pretty sure you're going to fall on your butt because you're trying to take video and walk backwards at once? 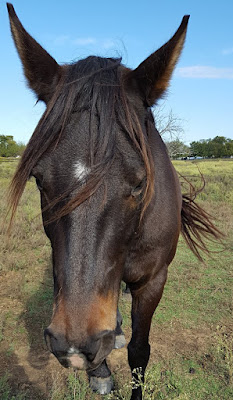