The last couple of weeks, I've been squinting at Justice's coat, trying to determine if what I'm seeing is dirt or white hair.

Well, apparently it depends on what bit I'm staring at.  Like this shoulder: 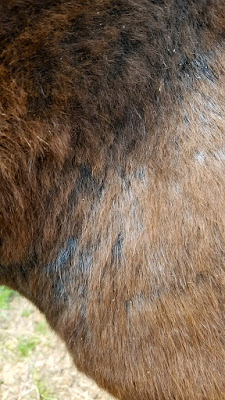 It's not mange, I swear.  lol It's white hair slowly growing in underneath the sun-bleached coat.

The current expectation of the barn owner is that he's headed for the bay version of this:
I was thinking not - and then I found that white on his shoulder... lol

The babies are supposed to head back to the main barn this week, assuming the weather quits being quite so much spring in Texas.  (This weekend featured 80 degree temperatures and a hailstorm with hail up to almost 5 inches in diameter in places.  Ahahaha... hahaha... haha... ha... I hate spring.)  That means bigger pastures for them, and a better setup to see if maybe Justice just needs some dietary assistance to get out of the ugly duckling stage.  We had him on some grain that did a great job fattening him up over the winter - but as soon as we took him off of it, he shot up a couple of inches and started growing his spring coat, so we've lost ground on the Battle of Baby Franken-Horse again.
Posted by Sarah W at 9:05 PM 2 comments: 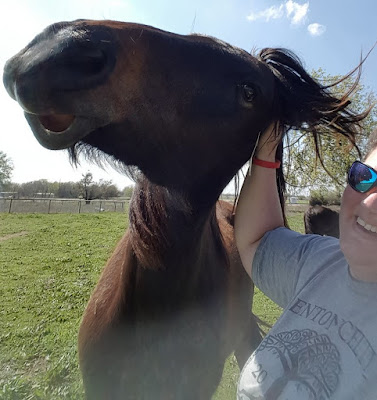 Spring is firmly here, and all the horses are itchy.  So I have a whole series of photos of Cessa getting ear scratches that are just hilarious.  That one's my favorite, though.

Justice got... half a bath, let's call it.  He's not the most reluctant of the babies to get hosed off loose in the pasture, but he's not thrilled about it either.  (One of his half-siblings is a hose hog, though, which was cracking us all up.  "Hose meeeeeee!")

He wasn't bad.  He just asked nicely if he could opt out by trying to walk away, and sighed quietly at me when I made him go back into the water.  And hey, there's something resembling a real horse under all that fur! 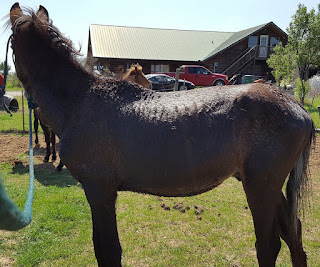 He really, really needs an actual bath, though.  I'm pretty sure the dirt in his coat is gathering dirt.

*sigh* And farewell, tail.  Yes, that's actually his tail hanging off the back there, and no, it's not that thin because it's wet.  It's just that thin.  It'll grow back - and undoubtedly when it does so, it will be all or mostly white, since it almost is already.  But in the meantime, hello appaloosa rat tail...
Posted by Sarah W at 8:49 AM 2 comments:

This is just hilarious to me. 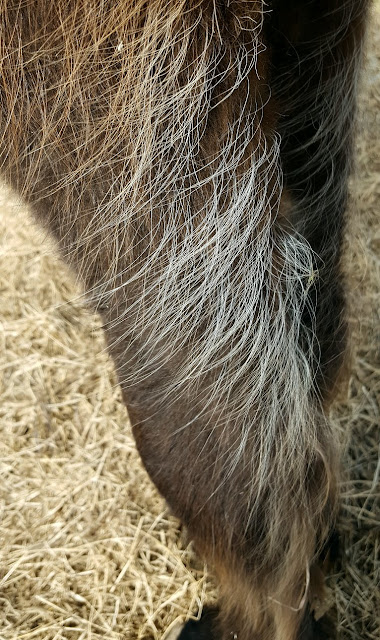 Yes, those are long, white guard hairs on Justice's front legs.  The leg itself is brown.  He just... he just has these hairs sticking out like four inches longer than all the rest of his hair.

This, on the other hand, is what looks like when someone has a scar because someone refuses to wear bandages on her foot and thus had a triangular cut heal stupid. 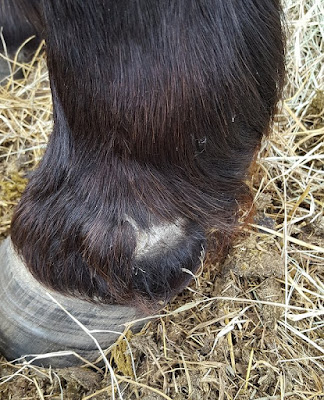 Normally all you can see is the bump there, but the vet trimmed the hair back so he could see what was going on.  She doesn't have a limp or anything; it's just funky cosmetic crap.  Ah well - not worth a few hundred dollars to make it look pretty, that's for sure!
Posted by Sarah W at 12:38 PM 2 comments: 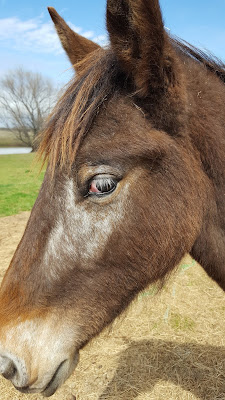 Those white patches on his muzzle and around his eye are going to meet sooner rather than later, I suspect.  And let's not talk about the big long white guard hairs that have suddenly appeared on the backs of his forelegs.

Cessa also says hello.  Or at least, "yes, scratch me there, minion." 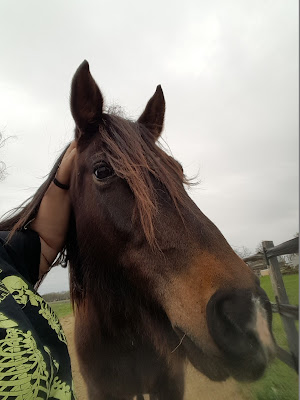 And yes, those were both taken today!  Cold front + rain is blowing in.  I had checked for the rain forecast but not the temperature forecast (oops), so I figured I should probably go home when I started shivering...
Posted by Sarah W at 8:20 PM 2 comments:

Let's just keep that, shall we?

Shortly before I got her, Cessa decided to slice up her foot on a piece of wire fencing.  It healed a little funky, because Miss Thing cannot leave bandages alone, and it's just kinda been there, staring at me.  It doesn't seem to bother her; it's just vaguely ugly, in a kind of, "What is wrong with your - oh, right, you cut your foot and now it's weird," kind of way.
Well, after a non-barn weekend (due to yucky weather and a trip to a local festival), today was Vet Day.  One obnoxious stud colt (not Justice) got his nuts snipped, a lump was determined to be a tooth eruption gone funky, some teeth were floated, some Coggins were pulled, some pregnant mare inspecting was done... and since at first it looked like there was no one else but the owner of the colt and lumpy boy would be attending Vet Day, I'd offered up Cessa's foot for a look-see.

We'd been thinking it was proud flesh, in which case: snip it off, be done with it.

Yeah.  Not so much.  It's basically a scar now - thickened skin and the like - and the vet reportedly said to leave it alone, in no small part because it would be several hundred dollars to manage/remove.

So... we'll be keeping that small and vaguely unsightly lump.  lol

Local festival was fun, if not really horse-related.  They had some horse demonstrations - Arabians, minis, the local police force, and 'warhorses' from an area place that has iffy taste in drafts, if what they brought was any indication - but it was an Irish festival and the horses actually weren't why we were there.

We lost our little dog in November, and we're slowly starting to look at getting a new dog.  A lot of the rescues - including a few I'd been eyeballing - show up at the Irish festival, so we went to see them and kind of see what they were like/about.

The "visiting with rescues" part was kind of a failure, because while the brain is ready for a new dog, the emotions are still working on it, apparently.  (Felt so bad for one lady.  "Do you want to enter our raffle for a dog bed?"  "We don't need one right now, thank you... *TEARS*"  Sorry!)  But there were tons and tons of dogs - not only are rescues there, but people are invited to bring their dogs!

Just to get everything linked together in one place!  :)