A story of 3 babies

I had one of those irritating headaches that persisted through all the drugs I could reasonably throw at it, so no media from this weekend.

On the other hand, I do have a brief study in horses:

Haltered him, sprayed him with flyspray.  He circled and circled, unhappy with the process, and eventually stood still.

No halter, spritzed her with flyspray.  She took off at a trot to the other side of the paddock and wouldn't come near me again.

No halter, spritzed her with flyspray.  She flinched once, then stood rock-steady while I sprayed one side, walked around her, and sprayed the other.

They're all so different, despite having the same sire!  (Okay, half-sister 1, I expected that shit.  She is Cessa's baby, and Cessa stamps her personality all over her babies.  It's hilarious.)
Posted by Sarah W at 9:57 PM 2 comments:

Email ThisBlogThis!Share to TwitterShare to FacebookShare to Pinterest
Labels: Justice

Today is one of those days where I'm so very tempted to talk about the crazy-ass drama that led to my friends basically getting out of the horse industry.

However, my friends do not deserve that bullshit falling on their heads.  I really, really shouldn't publicly name names.  At least one individual involved has set up Google alerts on her name and her daughter's (and probably the name of the registry).  About all I can do is note that baby boy is registered with the original registry, and that if you search for the S in that registry name, you can probably figure out what the new so-called registry is.

For now, I am going to content myself with this:

When you try to outright steal a registry, then create your own registry for the same breed when your piss-poor attempt fails... and then you spend more than a year systematically lying - and getting your clueless friends who believe your shit and your alts to spread those lies - in order to destroy the original registry and the people that caught you at your attempted theft and stopped it... you do not have a high horse to sit on.  In fact, when you add on to that probable industrial espionage and outright fraud, the high horse has left the fucking county.  So don't sit there and claim you "rescued" a horse that didn't need rescuing from the people whose life you tried to destroy.

Also, all of your breed registry shit looks like it was created by a talentless hack of a scrapbooker.  Especially your papers.

May every one of you get exactly what you deserve. 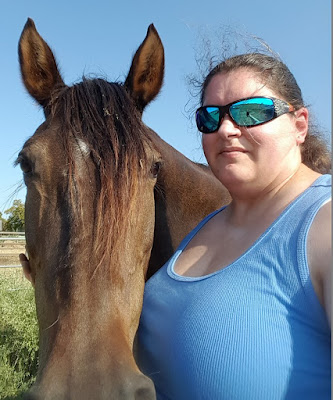 Email ThisBlogThis!Share to TwitterShare to FacebookShare to Pinterest
Labels: drama

Last Sunday, my parents wanted to finally meet the ponies, so we headed up to the barn. Verdict?  Nobody died, nobody got stepped on, I didn't get squished because Cessa's pasture-mates have more manners than she does, and Justice is "at least as big as some of the horses you used to ride."  *snort*  Not horse people, my folks...

Saturday was a wedding, so barn day was Sunday instead.  And it was actually almost cool instead of... you know... Texas weather!

Ever get the feeling you're being followed? lol
And yes, he ran into me.  Oops.  We're gonna work on a verbal whoa cue there, I think, so maybe I can stop him running into stuff with his forehead (at least while I'm watching)...

His random ear spot has reappeared, too! 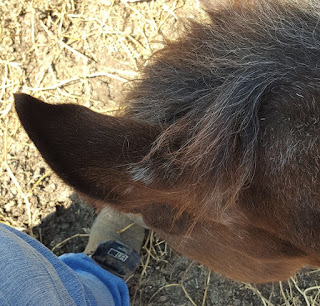 As for Cessa...  Well, someone was being a bitch because there was a new hay bale in the pasture.
The hilarious part is that she let me catch her twice last weekend without a fuss, but this weekend?  Nope.  Not having it.  I wasn't even carrying a halter!  Mares!