And then it rained. And this weekend, it's raining.

And on top of that frustration, last Friday we had to put down our cat of 11 years.

It wasn't really a surprise - she had malignant breast cancer removed the year we lost our dog (I honestly thought we would lose her that year), with a prognosis of 1-3 years.  Not only that, but her dental in the spring had turned up a severe heart murmur (no lie, you could feel her heart pounding if you touched her chest) and the early stages of kidney disease; a midsummer vet visit to inspect a lump on the undercarriage suggested the cancer was back as well.  We decided not to remove it - in no small part because of the kidney disease and heart murmur.

The last couple of weeks, she was slowly declining - not eating enough, although she did still eat, and doing a lot of weird little things.  Like... this was a cat that would not stay under a blanket with you... but she spent a whole night under one with me.  She wasn't terribly interested in lying on feet anymore.  It wasn't anything I could nail down as "she's done," but it was all a bunch of weirdness that had me on high alert.  Then she stared having accidents, and she'd never had one in the entire time she lived with us.  It was time.

So hug your pets for me?  Especially the kitties. 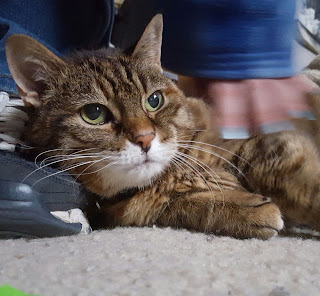 So, hard truth time, y'all: re-riding is hard.

Like, here I am - almost twenty years of lessons under my belt.  Plus another five years of just casual riding.  I should be fine to get on a horse and go ride around, especially my horse, and greenness shouldn't matter, because I've ridden greener than "60 days under saddle with a pro trainer."

The first time I tried to get on, I was shaking so badly that we all just went, "Yeah, no, let's step back for a minute and try again."  The second time I tried to get on was a back-and-flail - you know, where the horse backs away from the mounting block and you're trying to get on and you just kind of flail your way out of the stirrup and somehow stay upright?

Third time, though - that went the way it was supposed to.  And then I got led around for a bit and hopped down after maybe five minutes, because I am a total weenie and I'm totally ok with rewarding "greenie behaving perfectly for a human having Moments" with "let's putter around long enough for me to relax and test out brakes and steering on a lead line, then call it a day and stuff cookies in your face."

Next time?  Less equipment.  Don't need the running right now - or the snaffle rein.  Still a little skeptical about this cowhorse bit - loose ring snaffle with a ring as the middle joint and curb mouthpieces means it's all... floppy. lol (Also perilously easy to get under her tongue if it's at all too loose, which is why bridling took three tries.)

But I rode my horse!

We had this great plan for the weekend!

Saturday was a wash due to various obligations, and Sunday was "pick up horses from the trainer" day.  So Monday, we were all going to get together and get on our 60-90 day broke horses and pretend we've ridden more recently than... ugh, at least a year ago? lol

And then it rained.

There was some registry business that needed to get done, so I packed up the car with too much stuff and headed up there anyway.  I mean, why not?  We could always socialize for a while.  And maybe it wouldn't have rained yet by the time I got there, so we might still be able to ride.

Yeah.  About that.  The thing with tropical systems around here is that they always come from the south.  And the barn is north of me.  And when you're driving north through rain that's moving north...

So we ended up camping out under the arena-side cabana, since the rain was mostly nice and straight.  We zipped up the fabric on the side where the rain was coming from and then did up the mosquito netting on the other sides to keep the spray out.
And that was fine and good, at least for a while!  Herd got stupid between rainstorms, which was fun to watch as they galloped around and boss mare reclaimed her spot at the top after 90 days at training.

Then all of a sudden, it started raining really hard, and the wind kicked up a little.  So, being sensible creatures, we all got up and reached for the sides to zip up the fabric on that side instead of the mosquito netting.

As I was reaching for the fabric, I looked up and saw this weird, ultra-fast-moving cloud starting to sprint across the sky.  "Huh, that's weird," I thought.This was followed by, "Oh, fuck," as the wind that was making the cloud go that fast hit us, grabbed the cabana, and lofted that sucker up over the table and towards the arena.

Now, bear in mind... this thing is set up next to the arena.  It's also next to the pasture.  So on one side, we had a herd of horses and a six foot fence.  On the other side, we had a four foot fence and a very curious gelding who went, "Oh!  The humans are doing something!  Let me go see what they're doing!" and came trotting over.

So the three of us each grabbed a part of the cabana and pulled.  There's probably 10-15 feet between where it was set up and the arena fence, and we managed to anchor it just enough that it ran up against the fence and didn't go over - and thankfully the wind lasted maybe 30-60 seconds.  And then two of us yelled at the third to get the hell out from underneath the cabana as it was trying to collapse on us after it landed, which amusingly is the only yelling that took place during the whole thing (and it wasn't so much yelling as an incredulous, "Get out of there, omg.").
Now, let me assure you: this cabana was anchored into the ground.  It wasn't just sitting there.  The wind actually pulled the tent stakes holding it to the ground out and pulled it out of probably 3-4 inches of packed sand that was on top of the tent stakes and around the foot of the pole.  That, ladies and gentlemen, is what happens when your cabana gets caught in a microburst.  Had never been out in one before.  Wouldn't recommend, per se, but it was exciting.  lol

I should note that everyone is fine.  Well, everyone but the cabana, which was made with cheap-ass thin metal and crumpled like a sheet of paper in a couple of places.  It's all good, though - enough of it is salvageable that the plan is to make a wooden frame for the top pieces so we can re-hang the curtains and the roof and give it wooden legs anchored in concrete.
Posted by Sarah W at 8:51 AM 2 comments: